A night with a Master Vampire…

Posted on January 31, 2014 by jenniferloiske 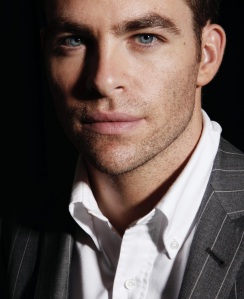 I’m spending this evening (along with the following night and probably the couple of following days, too…) with Jason, one of my favorite characters from Immortal Blood Series. In this week I had no time to read as I’ve been drowning under my work, which, in this case, has mostly been checking the proofs of the Blood Master, the third part of Immortal Blood Series, editing and approving promo pics that my super talented assistant has made for me.

Jason is a cocky bastard with a wicked mind. Owns a very short temper, kills for pleasure and has a body to die for. So no wonder when he turns his black eyes on me, my knees go all jelly and my head starts to spin…yeah, I know…I created him, but still…

I’ve imagined him in my mind like millions of times, so I added couple of pics of a famous actors that, in my opinion, would be perfect for the part…that is, if Immortal Blood Series ever ends up to the big screen 🙂

Anyway, here are some snippets from Club Number Five (part 1 of Immortal Blood Series) and Lucas (part 2 of Immortal Blood Series) that will help you to get to know Jason a bit better, and maybe your heart beats a tad faster, your knees sway dangerously and mouth forms these weird, deep aahs and oohs the next time you hear someone mention his name… 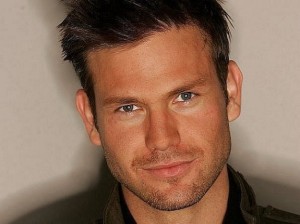 1) I stared at his black eyes and shivered. I had never been that scared in my whole life. And if I had thought for a second that Dane was bad, I had been wrong. This man with his perfect manners made my blood freeze. There was something in him that screamed he was all danger. Something that told me that if he had wanted me dead I’d be dead. Just like that. He came to stand behind me and leaned on me. I saw Dane and Jonathan and saw how they were struggling not to interfere. I sniffed.

“There now,” the man whispered and slid his hand onto my neck. “You don’t have to be afraid. This is just a friendly talk between friends, right?”

“Let her go!” Dane shouted and someone knocked him down.

“Dane!” I cried but was too afraid to even try to move.

2) “You said this is just a misunderstanding and you didn’t mean it.” He talked to himself and walked slowly around me. “But the thing is we don’t know if you’re with us or against us.”

“With,” I whispered, begging with my eyes.

“So you say, but have you ever fed just for fun? ‘Cause you see, we might look like we’re civilized, but underneath our skin there is a beast. And that beast wants only one thing. Blood. And if you don’t understand that, you can never survive among us. We are the strongest species on the planet. We are predators and we have the power to choose who can live forever and who has to die, and that, my darling, is a gift.” He pulled me up and put his hands on my cheeks. “A gift, Samantha. But it’s also a curse. We have to hide our true nature, as we are so few, and without our secrecy, humans might find a way to destroy us, and that we cannot allow.”

3) “Now, bring me a snack.” He grinned wickedly and immediately someone ran from the room.

“Don’t worry; I know what I’m doing,” said the man and turned as that someone rushed back into the room carrying a frightened girl. “Perfect.” Jason flashed his fangs. “Bring her here.”The girl was placed in front of us. Jason moved her hair and turned her head, offering her neck to me. I gulped. “Drink,” he hissed. “Drink as if your life depends on it.”

I wiped my tears and glanced at him. There was no way out. I closed my eyes and begged she would forgive me. And then I sank my teeth into her and drank. I felt myself getting drunk from her blood and lifted my head, but Jason pushed me back.

I fed from her again and I felt how I was draining the life out of her, but I couldn’t stop. Not when Jason’s hand was on my neck and he had the power to decide when I was done. I noticed her heartbeat weakening, but kept drinking. And when Jason finally released his grip, the girl was dead. I had killed her. 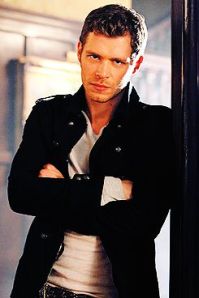 I found myself staring right into Jason’s eyes. He grinned at me and I inhaled sharply. Backing away from the door as quickly as I could, I ran into the kitchen.

The smile on his face didn’t fade. On the contrary. His grin widened and the pleasure of a hunting challenge flashed in his eyes.

2) “Why don’t we go to the living room?” Jason held his hand out to me and arched his brow.

He shook his head disapprovingly. “Easy, love, I just want to have a little chat with you.”

I shook my head, feeling horrified.

“Please?” His eyes held a warning and for a second I could imagine him killing all of my friends just to get to me. He held my gaze and there was something terrible in the way his lips curled.

3) I felt cold sweat starting to run down my spine. My eyes were glued on Jason and traced every move he made, mesmerized.

Slowly, he rolled up the sleeves of his black shirt and I yelped. He had a tattoo on his left arm. And not just any tattoo. It was an exact match of the one I had seen on Lucas. I didn’t need to be a brain surgeon to know what that meant. I knew by now that only a handful of vampires were allowed to have tattoos like that. So I shouldn’t be surprised to see the mark of a master killer on His Evilness’s arm.

4) He narrowed his eyes and moved closer. I held my breath. He was so close. Too close and there was nowhere to run. My back was pressing against the door and I felt the cold window touching my neck. I closed my eyes and dug my nails into my palms. I will not cry; no matter what happens, I will not cry, I repeated silently. He touched my lips. I trembled.

“My beautiful Samantha,” he sighed and let his hand rest on my cheek. “You have nothing to worry about.” 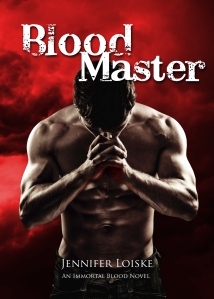 Oh, and did I mention that Blood Master will be out in late February? No? Well, here’s a cover of Blood Master…just to give you something to wait for…

Jennifer Loiske lives in Finland in Naantali, which is a small sunny town on the southwest coast. She is a pre-school teacher by profession but she stayed at home when her youngest daughter suffered brain fever, which developed severe epilepsy in 2004. She is a workaholic Teen/Young Adult author, who loves dark fantasy, teen movies, chips and candies and warm sunny days. She’s also very keen on charity work and a big part of her royalties goes to the charity; mainly to help families with epileptic children but also to the epilepsy units in the hospitals. As a huge fan of dark novels Jennifer's bookshelf is full of books from L.J. Smith, Alyson Noel, Stephanie Meyer, Chloe Neill, Michelle Rowen, Jennifer L. Armentrout, Amanda Hocking and Lauren Kate. She’s also a huge fan of music from Evanescence, Linkin Park, Within Temptation, OneRepublic and Disturbed. But her hunger for music is endless and depend on what mood she’s in or what kind of book she’s working on. She can be pretty much an omnivore when it comes to music.
View all posts by jenniferloiske →
This entry was posted in Friday Dates, My writing journey and tagged books, fun, Jennifer Loiske, Kindle, London, NA, newadults, paranormal romance, PNR, sassy, urbanpnr, vampires, writing, YA, young adults. Bookmark the permalink.